Construction is expected to begin this fall on a plan that would bring a new business park addition to the city of Maple Grove. The city council gave approval on Monday night.

The proposal, known as Arbor Lakes Business Park – Phase 3, calls for three new 2-story buildings totaling more than 530,000 square feet. They would be located on a 60-plus acre site in the city’s Gravel Mining Area east of Lowe’s home improvement store and north of Interstate Highway 94.

Two additional buildings facing I-94 could also get approved at a later date.

“The proposal as a whole, staff has no major concerns with,” said Peter Vickerman, Maple Grove planning manager. “We look forward to more development of this business park.”

The development has the potential to create hundreds of new jobs. Phase 1 of the business park is completed, while Phase 2 is currently under construction.

During Monday’s meeting, Maple Grove Mayor Mark Steffenson wondered how the buildings would look off the freeway and if drivers would be able to see them.

Joe Bergman with Endeavor Development, the Minneapolis-based developer behind the project, said the company plans to take down a berm between the freeway and the project site to make the buildings more visible. Bergman said the fourth and fifth buildings would be raised up slightly along the freeway.

“They’ll be a little bit more prominent from the freeway,” he said.

The project will need approval from the Shingle Creek Watershed District before any grading can occur. Work will also include construction of a roundabout at Fountains Drive and Zachary Lane. 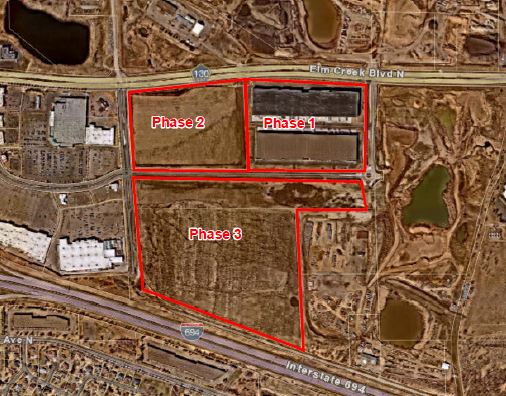