A man is hospitalized after an early morning shooting Monday outside a Brooklyn Center gas station.

The shooting occurred at about 1 a.m. outside the Speedway gas station off 69th and Brooklyn Boulevard. Police say there was a group of people hanging out in the area when the shooting happened.

It’s not known what led to the shooting. However, police don’t believe the shooting was random.

Some residents who live near the gas station say they are concerned about the recent rise in gun violence.

“It’s a real tragic thing that people are really getting shot for absolutely no reason. Just only because of the behavior, and it’s just like a repeated thing that’s been going on, and it’s putting our community in fear,” said Danae Lawson.

According to Brooklyn Center police, the man has a serious but non-life-threatening injury. As of Monday afternoon, no arrests had been in the case. 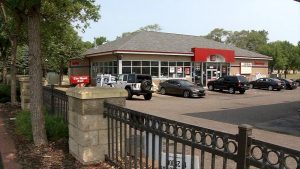 Speedway Gas Station in off 69th Avenue and Brooklyn Boulevard.

There was also a shooting near that same Speedway earlier this year. On March 28, a woman was shot and injured. A man was arrested and charged with second-degree assault for that incident.

Brooklyn Center police have seen an increase in shots-fired calls. Police were able to verify at least 23 cases through the end of June, compared to 13 in the same period last year. It’s an issue affecting other suburbs like Brooklyn Park.

If you have any information on the latest shooting, contact Brooklyn Center police.