A Robbinsdale man is charged in an incident that put North Memorial Health Hospital into emergency mode after the hospital discovered someone had shut off its oxygen supply for patients.

According to the criminal complaint, Raduenz climbed a fence where the oxygen tanks were secured, broke cable ties and metal clasps, and then shut off the supply. Engineers detected the pressure drop. Hennepin County prosecutors say the crime could have injured or killed many people if the vandalism hadn’t been discovered quickly.

“It is shocking that an individual would take a step like this to endanger the lives and well-being of innocent and hospitalized people,” Hennepin County Attorney Mike Freeman said in a statement released to CCX News. “Our office is currently investigating this case and we will pursue other charges if evidence supports us doing so.”

Surveillance footage spotted Raduenz walking through the North Memorial Health hospital atrium and then exiting through sliding glass doors, the complaint said. After leaving the hospital, video shows Raduenz walking toward the fenced-off oxygen tanks. About 10 minutes later, a hospital engineer noticed a rapid decline in oxygen tank pressure and went to check the main valves. The engineer then discovered the vandalism. 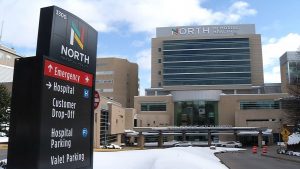 Police arrested Raduenz Wednesday at a homeless shelter in St. Paul. He told investigators that he was upset with the hospital, and later, after initially denying any involvement, admits that he may have been the one who interfered with the oxygen tanks.