A Bloomington man has been charged with two felonies in a Brooklyn Park apartment shooting that seriously injured another man inside a unit at the Huntington Place Apartments.

Ananias Williams, 23, is charged with second-degree assault with a dangerous weapon and possessing a firearm when prohibited. The shooting occurred Friday at about 7:10 p.m.

According to the criminal complaint and witness accounts:

Williams came to the apartment of his ex-girlfriend where the woman’s boyfriend was. An argument involving the two men began that resulted in a physical fight. Shortly after, a gunshot was heard.

The complaint said Williams had a gun in his hand with the other man holding him up against a wall. That’s when additional shots were fired.

The victim suffered multiple gunshot wounds, including a shot to his left chest area. Police say he was rushed to a nearby hospital and is expected to survive. Williams also suffered a gunshot wound to his hip. It’s unclear if the same weapon Williams allegedly had was the one that injured himself.

Surveillance video shows a man similar in appearance to the suspect arrive at the apartment complex minutes before the shooting. Police also recovered a weapon from the suspect’s jacket. The weapon was loaded with its serial number obliterated, the complaint said.

Brooklyn Park police said both men were “partially cooperative” in their investigation. Williams has two prior convictions of second-degree assault.

Three young children were inside the apartment when police arrived and officers located the two injured men, the complaint said. 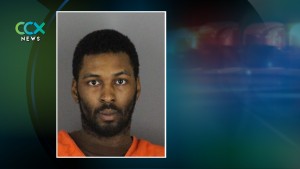