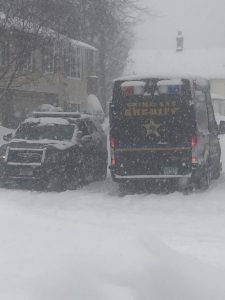 The Hennepin County Sheriff’s Office is investigating an incident in Maple Grove in which a man apparently broke into someone’s home and died just after police arrived.

Police responded to a 911 call around 4:50 a.m. Wednesday at a home in the 14000 block of 92nd Avenue. When they arrived, they found a man who did not reside at the home. Shortly after, officials say the intruder went into cardiac arrest and died.

The Hennepin County Crime Lab was at the scene most of the day Wednesday. CCX News talked to a woman who called police after she heard her neighbor screaming.

“He was yelling and screaming banging on the doors, I think he punched out a couple of screened windows,” said neighbor Vera Labute.  “He threw out a dresser drawer and he ran out from the garage, barefoot and in sweatpants and T-shirt.”

Officials have not identified the man who died. Meanwhile, the Hennepin County Sheriff’s Office says this is an active investigation and will provide more information when it becomes available.