Mark Lynde organized a meal delivery for Osseo seniors at the onset of the coronavirus outbreak. A week later, we check with Lynde’s to see how the delivery is going. 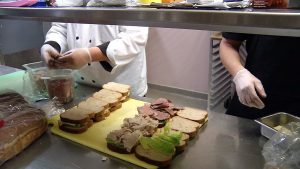 Volunteers inside Lynde’s Restaurant prepare meals that are delivered to Osseo seniors.

Now, the program has a new name.

“The We Care Program is off to a great start,” said Mark Lynde. “We’ve been getting some donations. We project to do about 7,000 meals in Osseo. Those are all free of charge to any Osseo resident that is 65 years or older. It’s going real well.”

It’s all hands on deck to pull this off. Lynde’s has a team of volunteers putting in many hours to make this happen.

“We’re packing up about 300 to 400 meals a day,” said Cathy Lynde. “We’re doing a lunch and a dinner and we’re dropping them both off at the same time so there is not so much contact with the seniors.”

The We Care Program has already made a positive impact in Osseo. Lynde says the presence of volunteers bringing meals to the seniors brightens their day.

“It’s exciting to see the seniors,” Cathy Lynde said. “They’re so excited to see us. They’re so thankful for the meals We appreciate all the donations coming in.”

“Every single day we get up rise and shine,” said Lexi Lynde, a volunteer. “We come to the restaurant and help deliver the food to them,.”

One of the largest donations came from the Osseo Lions Club, which chipped in $5,000.

“We are asking for donations now because of the program being drawn out,” said Mark Lynde. “You can make the donation to the Osseo Premier Bank. They’re taking them right at the location. You just tell them it’s the We Care Program. Osseo feeding seniors.”

The Lynde’s hope other restaurants in the Northwest suburbs will step up and also donate meals to seniors during the COVID-19 outbreak.