Senator Ann Rest got the last word at a Blue Line light rail transit meeting of stakeholders and officials on Thursday. 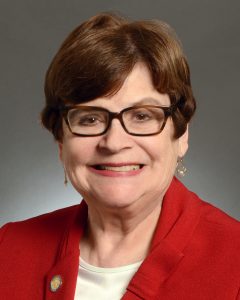 The DFL senator from New Hope said she was disappointed in the vote by the Corridor Management Committee not to further pressure BNSF Railway into using eight miles of its freight lines to build the 13-mile METRO Blue Line Extension from Minneapolis to Brooklyn Park.

“We are going to remember this decision,” said Sen. Rest. “And continue fighting to make sure LRT is brought to the working people’s corridor. And that is who we are.”

The day before the meeting, Rest proposed legislation in the special session that would further tax railroad property in Minnesota.  Other senators signed on as well, many of whom are also representing areas affected by the current route. They include Sen. John Hoffman (DFL-Champlin), Sen. Chris Eaton (DFL-Brooklyn Center), Sen. Scott Dibble (DFL-Minneapolis), and Sen. Ron Latz (DFL-St. Louis Park). Senator Rest says the bill was the language of the proposal by Governor Dayton in 2015.

Two stakeholder groups, the Blue Line Now Coalition and Blue Line Coalition, are in favor of the bill too.

Golden Valley Mayor Shep Harris released a statement on Thursday saying the coalitions are in agreement that all options for negotiations among Metropolitan Council, Hennepin County and BNSF have yet to be exhausted.

“We strongly encourage these conversations to continue. Furthermore, as this proposed line impacts the communities it would pass through, we believe it would be a mistake not to include these coalitions in the decision-making process,” said Harris.

Harris pushed for the Corridor Management Committee to “exhaust all options” with the current BNSF route while exploring a new route. The motion did not pass. One reason is Minneapolis City Council representatives on the committee believe a route change could better the North Side.

You can read more about the bill and track its progress in the Minnesota Senate here.

CORRECTION: This story originally reported the legislation was proposed on Thursday, after the Corridor Management Committee meeting, when instead it was proposed on Wednesday before the meeting occurred. We apologize for the error.