The Plymouth Police Department will host a virtual community notification meeting Monday in regards to a Level 3 sex offender moving into the city. Level 3 is the highest risk to reoffend.

Kevin Eddie Hampton, 39, has moved within the vicinity of the 13000 block of 54th Avenue North, police said. According to the Minnesota Department of Corrections, Hampton engaged in sexual contact with a teenage girl he did not know. Hampton was 24 years old at the time. Authorities say the assault happened after he met the girl in a public place and invited her to his home. Hampton then threatened the girl to gain compliance, authorities said. 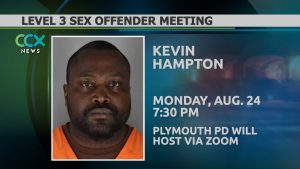 The community notification meeting will take place via a Zoom webinar on Monday, Aug. 24, at 7:30 p.m. Representatives from the Minnesota Department of Corrections and the Plymouth Police Department will present public safety information and be available to answer questions at the virtual meeting.