A Brooklyn Park youth group and community leaders met virtually with top law enforcement officials from across the state Wednesday to discuss the upcoming Derek Chauvin trial. Jury selection for the trial starts Monday with opening arguments to begin March 29.

The Cities United Cohort Project, which is based in Brooklyn Park, hosted the meeting. The organization serves boys and young men, ages 13-18, to help them deal with life challenges. The group has weekly meetings, and this week’s topic centered around the Chauvin trial. Participants said they don’t want a repeat of last summer after George Floyd was killed.

“Everybody living in the Twin Cities remembers what happened last,” said Department of Safety Commissioner John Harrington. “We had businesses burned, and hundreds of places looted, and people injured.” 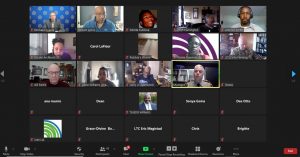 The FBI will oversee the joint operation from its Brooklyn Center field office.

“We will have around two dozen local partners and federal partners that will come in, and we will share intelligence related to threats that might arise,” said FBI Special Agent Michael Krause.

“How are community members supposed to trust law enforcement when the cities are being heavily militarized, which is not indicative of just the trial?” asked one participant.

“We’re not militarizing the city. What we’re doing is trying to protect the courthouse,” responded Harrington.

Some residents are taking a wait-and-see approach.

“It’s nice that you have a plan, but until it’s put into practice, it’s hard to say that it’s going to work,” said Zoom participant Christina Valdivia.

Law enforcement officials said during the meeting that they are committed to protecting everyone’s rights to peacefully protest while at the same time not going over the line when it comes to policing.