Members of the Champlin Park basketball team put Kobe Bryant stickers on their sneakers to remember the player who died in a California helicopter crash on Sunday. Players shared they will always remember where they were when they heard the news of Bryant’s death.

“Around sixth or seventh grade I would go outside my house to hoop,” said Rebels center Francis Nwaokorie. ” I would practice Kobe’s signature fade away.”

At Champlin Park, Kobe’s tragic helicopter crash was a soul-crushing moment for many Rebel players.

“I was at work actually and someone told me and I just didn’t believe it,” said Champlin Park point guard Joshua Strong. “My heart dropped to my stomach and it was just an eerie feeling.”

“I was watching a tribute video on YouTube and I couldn’t control myself from crying at that point,” Nwaokorie said. “I was feeling that Kobe Bryant is actually dead now. It was just a very sad moment for me.”

Two days after an accident claimed Kobe and eight others, emotions are still raw. “It was a surreal moment for me,” Nwaokorie said. 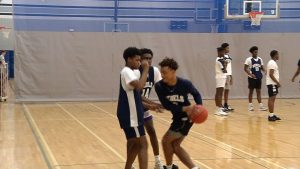 At Monday’s practice, a couple of Champlin Park players put Kobe tributes on their sneakers. Kobe was a basketball role model and even his legendary training routine is copied by some.

“My whole mentality now when I play basketball is because of him,” Strong said. “His work ethic, all that. He made it cool to work out to be honest.”

For Nwaokorie, Kobe was the ultimate superstar. “To this day I still believe he’s one of the greatest players to ever touch a basketball,” Nwaokorie said. “No matter what anybody thinks.”

Tuesday night Champlin Park plays Park Center in a key match up. There’s no doubt that Kobe will be on the minds of many players in that game.