Karen Bosveld Zemlin is making quite a splash in her career. In April the Plymouth resident was inducted into the Minnesota Swimming Hall of Fame.

Instead of pools, Zemlin thrives in lakes and oceans. She’s the first member of the HOF to specialize in open water marathon swimming. 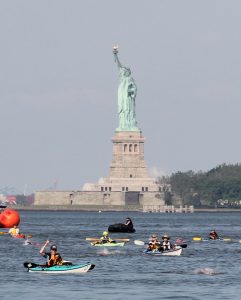 Zemlin swimming near Statue of Liberty

“I feel really amazed that they’ve opened it up to open water swimming,” Zemlin said. “I think that there’s a lot of opportunities. There are a lot open water swimmers in Minnesota. We’ve got lots of great lakes. I think it’s just the beginning of what’s going to be in the Hall of Fame.”

A major accomplishment for Zemlin was swimming the English Channel from the UK to France – and becoming the fastest woman over the age of 50 to do so.

Another personal highlight was swimming around New York City.

“That was like being a really slow sightseer,” Zemlin said. “The Brooklyn Bridge. The Statue of Liberty. It was amazing the sights around that. Water conditions change so much as you move around the island.”

“All the pools in Minnesota and around the country are shut down,” Zemlin said. “People are looking for places to swim. As they want to reach out towards open water they need to do it with their safety in mind and be smart. They need to maybe communicate with a group that has existing open water swimmers and get into it that way so they are with people that have some experience when you first start.” 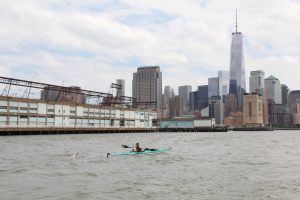 Zemlin swam her first lake race at 13 and was hooked. She likes the challenge of dealing with currents, tides, fish and and other elements that are part of  open water swimming

“It’s great,” Zemlin said. “All the weather, and all the waves and all the conditions that come with that open water, add another level of complexity.”

Zemlin has been able to conquer those challenges and is now part of Minnesota swimming history.