Winter is an excellent time of the year to take a look at the night sky. On a cold, clear night, the stars are amazing. There is an event coming up Monday that you don’t want to miss and you can start looking for it right now.

“When we look up in the solar system in the night sky, it’s just like the hands on a clock. You have some move faster than others. Venus takes seven months to go around the sun while the earth takes a year. Mars takes two years. Well Jupiter takes 12 and Saturn takes 29 and when Jupiter catches up with Saturn it will pass it in the sky. And that’s what we’re seeing,” said Ronald Schmidt, the observatory coordinator at Jackson Middle School.

This occurrence is called the Great Conjunction. It occurs every 20 years. But, it’s been 400 years since Jupiter has been this closely aligned with Saturn from the Earth’s point of view.

“They’re only going to be .1 degree apart. So if you have a telescope or even binoculars you’ll be able to distinguish two dots. But with your eyes you might just see them as one,” said Schmidt.

While the official day of the conjunction is Dec. 21, the two planets have been moving closer together all this year. Right now is a good time to go out just after sunset and look for the two neighboring planets on the Western horizon. 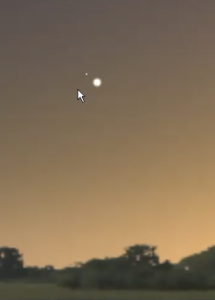 “I’m encouraging people to go out and look right now. Because you don’t want to wait until the 21st and if its cloudy you’ll think you’ve missed it. They are approaching each other right now and just to see them this close is pretty cool. And actually to see them getting closer over the next few days is even better,” said Schmidt.

Often when this conjunction occurs it happens too close to the sun for it to be observable. It is likely that the last time anyone saw these two planets this close was the year 1226, about 800 years ago.

“Around 5 o’clock its going to be dark enough for you to start seeing the stars come out. And one of the first ones you’ll see is Jupiter. So look off to the southwest. Off to where the sun sets and a little bit more to the south and you’ll see a bright star there. And as it gets darker you’ll see another star right next to it and that’s going to be Saturn,” said Schmidt.