On Sept. 9, the Golden Valley City Council formally welcomed Scott Nadeau into the fold as the city’s interim police chief.

“Mayor and council, thank you for the opportunity,” Nadeau said that day.

“We look forward to working with you right away here,” Golden Valley Mayor Shep Harris said to Nadeau during the meeting.

It’s a job that Neadeau found to be so attractive that he came out of a two-month retirement to take it. Nadeau stepped down as Maplewood’s police chief in June. 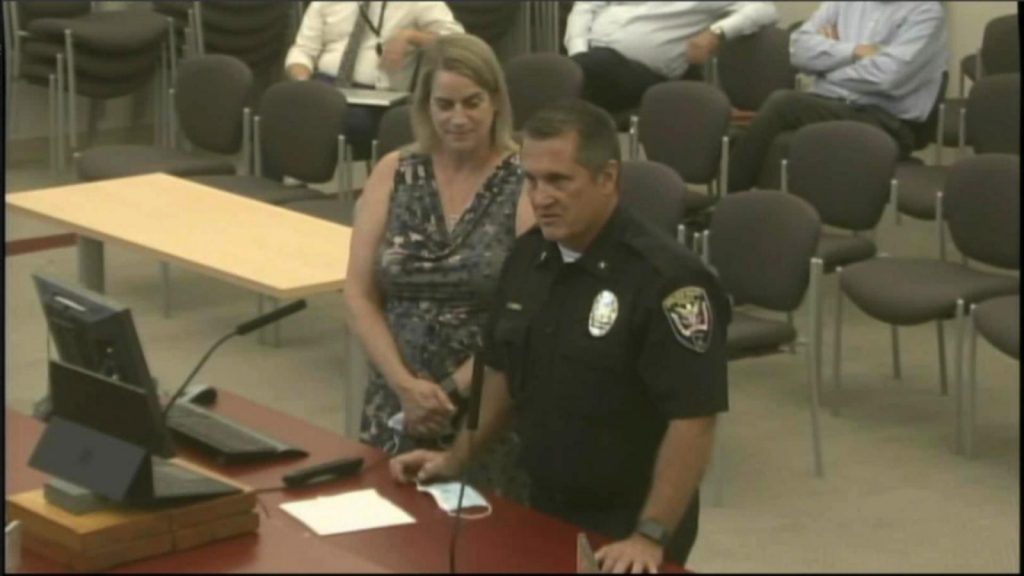 Scott Nadeau stood in front of the Golden Valley City Council on Sept. 9.

“I have always lived in the area, grew up in this area, I’m a Robbinsdale guy,” Nadeau said during an interview this week. “But went to Sandburg Middle School and have known Golden Valley for a long time, and so it seemed like a great opportunity.”

It’s an opportunity to share an outsider’s perspective with the department, following a 34-year law enforcement career with Maplewood, Columbia Heights and Brooklyn Center.

“Looking at the operation from the outside, I actually have some advantages, just having been in three different police agencies and having been the chief of two,” Nadeau said. “That even in my first week I’m like, ‘gosh why do you guys do it that way?’ And so it’s fun for me. But I also think it could be a big advantage to the folks here.”

Not here to ‘keep a seat warm’

Neadeau has made it clear that while he may just be the interim chief, he’s not here simply to keep the seat warm for the next person.

“I’m a person that wants to work toward continuous improvement, and wants to appreciate and build up our staff, and make sure we’re connecting with the community in the right way and doing the right things for the right reasons,” he said.

Neadeau says that city officials have given him the go-ahead to help “move the department forward” for the time that he’s here, whether that’s helping officers reach career goals or building relationships with the community in the aftermath of the police killings of George Floyd and Daunte Wright.

There’s no word yet as to how long Neadeau will be in this role, as the city has hired a recruiting firm to find a permanent chief.

But for now, Nadeau says he’s thrilled to be working for the Golden Valley Police Department.

“These are some challenging times for police,” he said. “And you know, where some people are kind of defeated by that, I can get excited about that, knowing the possibilities of what we can do working together.”