Minnesota’s winters can be picturesque and beautiful. But as anyone can attest, they can also be harsh and unforgiving.

“I’m not adaptable to winter,” said Bob Fisher of Wayzata. “I don’t like winter very much.”

Yet despite Bob Fisher’s distaste of the season, he came up with an idea 25 years ago to set those feelings aside and sleep in a tent on the front lawn of his Wayzata home; all with a greater purpose in mind.

“You and most everybody else would not think there’s a whole lot of needy people around Wayzata, but there are,” he said. “That right over [across the street] is The Boardwalk, and that’s Section 8 housing right there.”

What started as a one-man effort with Bob and his tent 25 years ago to help his neighbors, evolved into an annual sleep out campaign involving Plymouth-based Interfaith Outreach and Community Partners.

“We’ve gotten thousands and thousands of people to sleep out in their tents, to get involved financially,” he said. “To open their homes. to do whatever, bring in food, millions of pounds of food every year that we get in.” 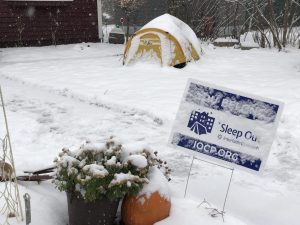 Bob Fisher has a tent and a sign in his yard, encouraging people to take part in the Interfaith Outreach Sleep Out.

In those 25 years, Interfaith Outreach has raised more than $32 million to help fight poverty, hunger and homelessness.

“And in the 25 years that the sleep out has been going on, we’ve prevented homelessness 34,200-some times,” Fisher said. “So you could darn near fill Target Field.”

Now, the hope is that others will follow Bob’s example.

This year, Interfaith Outreach is asking people to take the ‘Be Like Bob Challenge.’ They can donate online, they can encourage their friends to participate. they can put up signs in their yard, or they could set up a tent and organize their own sleep out.

“So we’re asking people to be careful,” Fisher said. “Sleep in a house, whatever. Go sleep in your garage. Sleep in your car.” 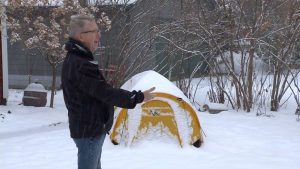 Bob Fisher showing off the tent in his yard.

The idea is for people to get out of their comfort zones while raising awareness for the needs in the area.

And while Bob admits that his days of sleeping in a tent during the winter have passed, he’s encouraging others to do it between now through the end of December.

“That’s always been my goal is just to get people aware and then get them involved,” he said.