Disposal of big, bulky items like furniture or appliances can be costly. To avoid that cost, some people illegally dump those items in places where they shouldn’t.

“It’s a burden to the property that’s being dumped on,” said Jason Newby, Brooklyn Park’s environmental and health manager. “We have public and private lands that get dumped on, and so there’s costs associated with that that is incurred by the property owner because it’s difficult for us to track back the source of where that came from.”

One such example is a pile of junk that was left on the side of the road sometime in early December along 68th Avenue in Brooklyn Park. The pile included a couch, a freezer and a bicycle, among other things. 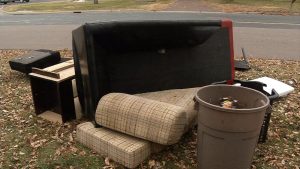 In this case, there was no property owner stuck with having to foot the bill, so the city had to do the dirty job of cleaning up the mess.

Brooklyn Park officials encourage people to properly dispose of these items through the city’s annual curbside cleanup events, the special material drop-off program, or simply by contacting your waste hauler to help keep your city clean.

“The work that we’re in here in environmental health is focused on keeping the city clean,” Newby said. “And I think residents also have the same expectations. We want those that visit, live here, and work here to have a sense of pride and well-being.”

Meanwhile, Newby says that if you see somebody illegally dumping items, to call 911.

Otherwise, if you see junk on the side of the road, you can file a report on the city’s website.