The pandemic has slowed down repairs to individual units at Huntington Place Apartments, but initial reports show some improvements are underway. Staff say they have only have 31 work orders on file, which is significantly fewer than what they had when Aeon Properties took over ownership of the property in early 2020.

The update came as part of a discussion in the Brooklyn Park Economic Development Authority meeting this week.  Aeon requested some changes to its EDA loan agreement because improvements are going slower than expected.  Economic Development and Housing Director Breanne Rothstein says during the pandemic, property managers would only enter units for life safety maintenance items. Aeon staff also said during the meeting that there’s also more to do than they first realized.

One of the changes involves establishing a community room in every building. Instead of just moving forward with completing the rooms, managers will establish one room as a pilot to see what works best for residents.

Some phase two improvements moved up to a higher priority include ADA compliance and some unit renovations. Units will be renovated in-between tenants. 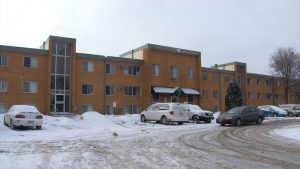 “In terms of property management, we’ve seen improvement in the crime numbers as well as calls. It seems as though it’s trending in the right direction,” said Rothstein.

Council members mentioned during the meeting that while they are still hearing some resident complaints, they are glad to see positive reports coming out of Huntington Place.

“I know how bad it used to be, and we’re getting a lot better,” said council member Terry Parks.

“Before, there were tons of things on work orders. Hundreds of them and so many things were not being done,” said Pha. “It takes time. It’s going to take time.”

You can listen to the full discussion from the EDA meeting here.