How Do You Get Rid of Moles? Brooklyn Park Company Shares Tips

Spring is finally here, but for some that means dealing with yard pests. For about three years, Metro Mole Control has been helping residents across the metro take their property back.

“We target common yard pests, typically we’ll go after moles, voles and gophers,” said Huberty. “It certainly can hurt property value. The more you let these pests hang around, the worse the problem gets.”

Huberty said damages caused by moles and voles can cost hundreds or sometimes thousands of dollars. 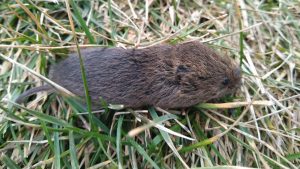 Photo of a Vole

“Vole is similar to house mouse. They’re larger and live outside. They’re not interested in going inside,” Huberty explained.

Voles are herbivores and eat things like plants, grass and tree barks.

“You’re going to see a lot of the vole activity in early Spring, right when the snow melts. They’ll create little trails in the yard, about as wide as a quarter or 50 cent piece, where they chew the grass right down to the root,” said Huberty.

Voles are seen just about anywhere but Huberty sees a lot of activity in newer housing developments. Voles like to live in concrete slabs, mulch and any gaps found near a home structure.

“The best thing to do in terms of vole is to close up gaps around house. They’re like mice, they like to burrow where the driveway pad meets house. Maybe there’s a gap underneath a patio.”

Huberty said moles on the other hand are insectivores. They eat grubs, insects and worms. Moles consists of turf damage including raised tunnels and occasionally mounds of dirt. 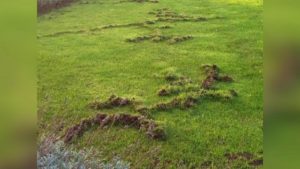 “The best thing is to remove moles first, and then there’s a few things you can try. Grub and insect killers, remove food in yard that moles may eat.”

Huberty said it’s important to remove the rodents first because when there’s less food around, damages could get worse.