A bill that would provide a total of $1 billion in bonus pay to workers deemed essential during the COVID-19 pandemic cleared one Minnesota House committee hurdle this week.

Rep. Cedrick Frazier, DFL-New Hope, is chief author of House File 2900. The bill would provide $1,500 to each worker who could not work from home and meets certain income and eligibility requirements. It would impact workers in a wide range of industries from nurses and child care workers to meat packing plant employees and jail staff.

“We called them ‘heroes.’ But so far we’ve given them nothing but hollow words and thanks,” said Frazier during the committee hearing.

The money would come out of the state’s $7.7 billion surplus. The House Workforce and Business Development Finance and Policy Committee passed the bill on a 9-4 vote. Republican lawmakers on the committee expressed some concerns about eligibility and income requirements, but expressed the bill has traction for bipartisan support.

A higher income limit of $150,000 for individuals or $250,000 for married couples is also written into the bill for those “employed in an occupation with direct COVID-19 patient care responsibilities.” That provision would prevent the exclusion of ICU nurses, who may have logged higher salaries due to overtime at hospitals amid surges in COVID patients.

“You’ve got a chance to recognize our small contribution to society. And you know something, you don’t have to call me angel. You don’t have to call us heroes,” said Turner, who is also president of the Minnesota Nurses Association. “But what we would like is just a little recognition for the work that we continue to do, because I’ll tell you what, right now the morale is at its lowest point.” 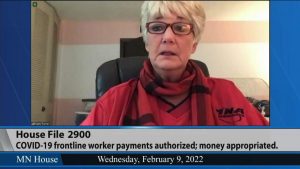 Mary Turner, a Robbinsdale nurse and president of the Minnesota Nurses Association

The bill is estimated to impact 667,00 frontline workers. If it passes the full Minnesota House, a companion version would also need to pass the Minnesota Senate.

There is some skepticism a bill of similar nature would get worked out in the Senate.

“Where is the seriousness of their proposal coming forward?” said Rep. Liz Olson, DFL-Duluth.