If you travel along Highway 55 in the northwest metro, you know how busy it can be, especially during rush hour. A Plymouth lawmaker is trying to alleviate the highway headache. Rep. Ginny Klevorn, DFL-Plymouth, is sponsoring a bill to bring bus rapid transit to the area. She says it would help cut down on congestion and boost the economy. 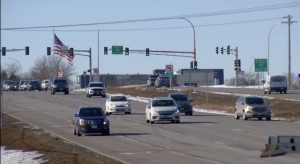 The proposed rapid bus line would go from downtown Minneapolis through Plymouth to its border with Medina.

Details on Bus Rapid Transit Still Being Worked On

Supporters of bill HR 64 say rapid bus service would make it easier for employees to commute, and it would attract more business to the area.

Abby Glirbas commutes from Minneapolis to Golden Valley and is on board with the idea. “Not spending the gas money, going back and forth getting stuck in traffic myself, being on time for work would probably be easier.”

This governor was very excited for my first testimony in a House Committee in support of bus rapid transit on Highway 55 in #GoldenValleyMN. pic.twitter.com/G5C8RyhkqN