Hennepin Technical College is collecting donations that will be distributed to people who need help after the recent unrest in Minneapolis. They are collecting non-perishable food, toiletries, and cleaning supplies through July 24. Another curbside drop-off time will be on July 15.

In parts of Minneapolis stores and shops were looted and burned to the ground. Getting basic supplies is a huge challenge for some.

“That’s right,” Kiava said. “A lot of destruction took place with businesses being affected first and foremost, but also some community organizations. So, we’re asking people to donate non-perishable food items, cleaning supplies and also toiletries. We’re gonna make sure that those items get to people in need.” 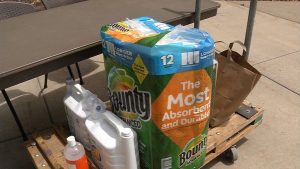 Any donation is a good donation. People need to know that things are far from normal in parts of Minneapolis.

“That is such a good point,” Kiava said. “Right after all the events took place, there was a lot of energy. You saw people showing up with brooms and rakes and power tools and so forth. But the amount of destruction, it’s really going to be a long term effort. The need is going to be there many months going forward so we want to just continue the momentum with this donation.”

The Hennepin Tech campus is not far from ground zero – 38th and Chicago. That is where Floyd died in Minneapolis police custody on Memorial Day. It was a seminal moment in time that had a huge impact on the school.

“Hennepin Technical College is one of the most diverse college campuses in Minnesota,” Kiava said. “So for our students and our faculty, the issues around social justice, they feel really personal. There was a really a sense after it happened that we want to do something substantive. We’re gonna work on a long-term list of items, but in the mean-time we want to do something immediate and address immediately.” 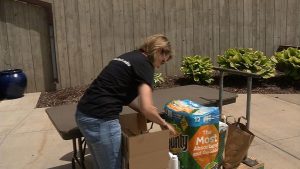 According to Kiava, Hennepin Tech could be adding some new college curriculum related to the movement in the wake of Floyd’s death.

“That’s right,” Kiava said. “We’re looking at a lot of different options so stay tuned we’re going to have some exciting announcements.”

Hennepin Tech will be collecting donations again on Wednesday, July 15.