In Brooklyn Park and Brooklyn Center, it’s not hard to find places offering food from regions well beyond Minnesota’s borders.

Yet despite the different options, it’s not always easy to branch out, especially when you have to cook the food yourself.

“I think there really is a bit of a fear in trying new things,” said Tracy Figueroa, a culinary instructor at Hennepin Technical College in Brooklyn Park.

Figueroa is on a mission to help people get out of their food rut.

“It’s oftentimes really neat to be able to introduce a new ingredient, even to a dish that you typically make and use as a substitution, that will just make the dish super dynamic,” Figueroa said. “You know just change the flavors completely by changing one ingredient.”

On Aug. 11-13, she plans to introduce people to some of those ingredients and the businesses that sell them. 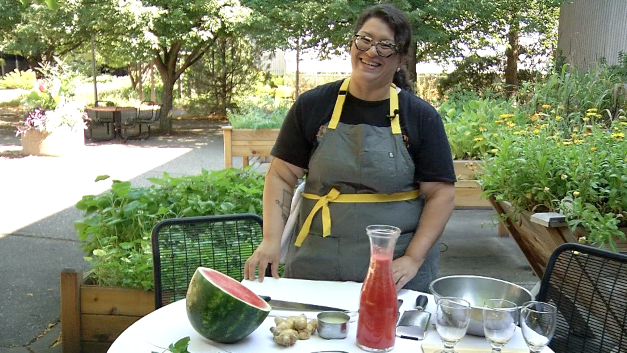 “It’ll be a huge array of techniques and methods that you’ll learn to cook, not only things that we cook in our American kitchens, but techniques and ingredients used all over the world,” she said.

One of the items on the itinerary is a watermelon ginger punch. The recipe comes courtesy of a former Hennepin Tech student from Africa.

All you have to do is peel and grate a nob of ginger, slice up a half of seedless watermelon, blend it all together and you have a refreshing drink.

“I would definitely use a lime wedge to garnish this,” Figueroa said after a demonstration.

It’s just one example of what someone can do if they have an open mind about food.

“This is our first time hosting the event,” Figueroa said. “We’re hoping it’s the first of many.”

To learn more about the World Flavors Culinary Tour, check out the Minneapolis Northwest website.