The Hennepin County Sheriff’s Office is the most diverse it’s ever been. Officials say more than 20 percent of staff are people of color.

Deputy Zelia Hoke is one of many Hennepin County deputies of color serving the community. She was inspired to put on the uniform after seeing another female deputy on duty.

“I didn’t see somebody who looked like me, and I felt like, okay, I’m going to fill that spot, and then I’m going to encourage others to do the same thing,” said Deputy Hoke. 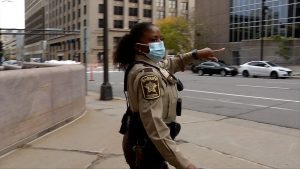 Hennepin County Deputy Zelia Hoke says it’s important for communities of color to see law enforcement who look like them.

She’s been with the Hennepin County Sheriff’s Office for under two years and primarily works at the adult detention center downtown. Hoke says Black law enforcement officials often get a bad rap for being a so-called “sell-out.”

“It bothers me that we’re looked at that way because most of us care. We care a lot about the people we serve,” said Hoke.

However, the deputy says the disparaging remarks don’t discourage her. Instead, they make her want to work harder.

“I do it because we’re needed out here. I just feel like if you want to change, you can’t just talk about it,” she explained.

Sheriff: ‘It’s Our Goal To Mirror The Community We Serve’

Brooklyn Park and Brooklyn Center have large African and Hmong populations. Hennepin County Sheriff Dave Hutchinson says it’s essential for the agency to be reflective of the community it serves.

“People perceive a problem with people of color. So, it’s our goal to mirror the community that we serve. So, if we have 15 percent African American people in Hennepin County, 15 percent of our deputies should be African-American,” said Hutchinson.

The sheriff says it’s also essential to promote and retain a diverse staff.

“We have to meet the concerns of the community, and part of that is diversity,” he said.