For the past eight years, people looking for a local stylist in Brooklyn Center could normally make their way to Inspire Hair District, which sits in an office building along Brooklyn Boulevard.

But since the novel coronavirus made its way to Minnesota, things have been far from normal.

“I just move by faith, and each day takes care of its own,” said Monaca, the owner of Inspire Hair District in Brooklyn Center (she declined to provide her last name).

On Tuesday, the Minnesota Cosmetology Board issued a directive saying, “We’ve received guidance that hair salons, nail salons and other spa-like businesses are included in the Governor’s executive order.”

The governor’s decision to temporarily close such businesses means that Monaca will be out of work until at least 5 p.m. on March 27.

She’s trying to keep a positive attitude about the situation and the potential loss of income.

“For me personally, I think it’s just a time for us to fall back, reflect,” Monaca said. “If you have faith, trust your faith.” 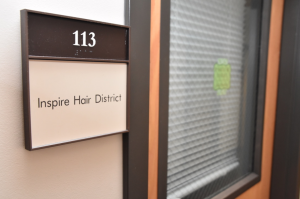 Inspire Hair District in Brooklyn Center, and other hair salons in Minnesota, will be closed until at least 5 p.m. on March 27.

Meanwhile, local barber shops are stuck in limbo too.

As of Wednesday afternoon, the Minnesota Board of Barber Examiners said it was seeking clarification as to whether the governor’s executive order applied to barber shops. The board finally received that clarification later that evening, when Gov. Tim Walz signed Executive Order 20-08.

‘There’s no social distance when it comes to barbering’

“We know it’s coming, but I’m going to work until I hear anything further,” Hyser said. 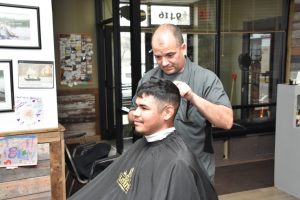 However, Hyser admitted that continuing to work with the coronavirus spreading came with a certain level of anxiety.

“I am scared, there’s no doubt,” Hyser said. “I look at my family and I look at my customers, and how would I feel if I would get some of my senior customers… if I had somehow got them sick? That would be terrible. So yeah, it’s definitely on my mind. There’s no doubt about it.” 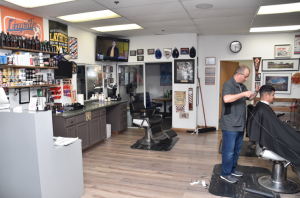 Tim Hyser, a barber from Nate’s Barber Shop in New Hope cuts a customer’s hair as he awaits clarification on whether the shop should close during the coronavirus pandemic.

In recent days, Hyser said he heeded the advice of the Minnesota Board of Barber Examiners, which encouraged all barbers to be extra vigilant in implementing all sanitation, disinfection and public health procedures.

“I’m on the front line of working with people,” he said. “There’s no social distance when it comes to barbering.”

While that may be true, cutting hair is Hyser’s livelihood. He hopes the shutdown doesn’t extend beyond March 27.

‘This too shall pass’

Back at the Inspire Hair District in Brooklyn Center, Monaca’s mind-set was to weather the storm during this time of uncertainty.

“We have to trust our faith,” she said. “We got through the recession. We got through a lot of different types of things. This too shall pass.”

By the end of the day Wednesday, the Governor signed an executive order for other services to cease operations, including: tanning, tattoo and other body art, massage and similar body work, aesthetician salons, and eyelash salons.