Student Arrested, No Injuries After Gunfire at Plymouth Middle School

The Plymouth Police Department responded Monday at 8:44 a.m. to a report of shots fired at Plymouth Middle School. It turned out a 6th-grade student fired multiple shots in a hallway outside a school bathroom. The school immediately went into lockdown. According to Robbinsdale School officials, “all students are safe” and no one was struck.

The student is now in police custody. The boy’s father told the Star Tribune that his son took the gun from his home and brought it to school.

“Any child that has to witness that at school, it’s a challenging day,” said Burrage.

Authorities say a staff member was the first person to respond. That staff member notified an on-site school resource officer. Officials couldn’t say yet what led up to the incident, citing the ongoing investigation. Detectives met with witnesses Monday morning, Fadden said.

Fadden said the weapon was recovered and police personnel did not have to use force to secure the scene. The Plymouth public safety director also indicated that authorities are in communication with family of the student arrested. 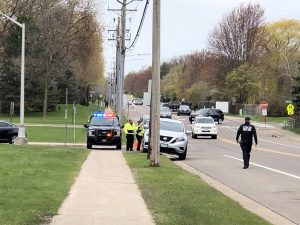 The Robbinsdale School District directed families to pick up their children at the east parking lot of nearby Armstrong High School.

Burrage responded to some questions and concerns from families who were not aware what was going on. She said it took a while to make sure all students were accounted for. Burrage noted there are 729 students at Plymouth Middle School.

“It’s not a fun day for anyone that has to manage a gun at a school, but we all work together to make sure we have a positive outcome,” said Burrage.

Parent Breanna Moore was among the many parents anxiously waiting to pick up their child from school.

“You never would think it would happen so close,” said Moore as tears streamed down her face. “You think you’d send him to school and you think he’s safe when he comes to school, and they’re not even safe when they come to school.”

Plymouth police also indicated they will continue to be at the scene.

“There will be a visible police presence here throughout the day,” said Fadden.

The Hennepin County Sheriff’s Office is assisting with the investigation.