People continue to mourn at the memorial site where Daunte Wright died, but as large gatherings resume, neighbors are expressing concerns.

The memorial is located on the corner of 63rd Avenue North and Kathrene Drive in Brooklyn Center. A 12-foot tall wooden fist stands there. The statue was transferred from the George Floyd memorial in downtown Minneapolis.

Jennifer and Lorenz Oliver-King live a couple blocks away from the memorial. The couple says it’s a welcome site to their neighborhood.

The long-time residents have noticed more visitors in the area due to the memorial.

“I don’t see any impact. I don’t have fear of this area being anything other than a memorial,” said Lorenz. 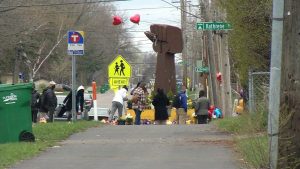 However, in that same neighborhood, others feel uneasy.

“It was out of control,” said Gary, a Marine veteran, who didn’t want to reveal his last name. “The people that come here are good people, but they draw instigators, and that’s the fear we have.”

Gary told CCX News about a neighbor who didn’t come back to the house for three days, in fear of the crowd.

“They were threatened in their yards by instigators, yelling and screaming, jumping on cop cars,” Gary explained.

He said 63rd Avenue tends to be a busy road and feels that the gathering of large crowds makes it unsafe.

“You can’t see around it (statue), you cant drive around it without having 15 people in your way. You have to stop for them. Kids can’t play,” he said.

As for Jennifer and Lorenz, they say the site should stop people in their tracks if it means bringing unity.

“The unity of everyone coming together and grieving together makes sense because the emotions needs to go somewhere,” said Jennifer.