Trung Le Nguyen, who is best known as “Trungles,” grew up in Brooklyn Park drawing with pen and paper. What was once his childhood pastime has now grown into a blossoming career.

Trungles is a popular Vietnamese-American storyteller and graphic novel artist who is winning national awards. 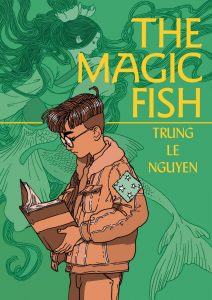 “I’ve always been really interested in picture books when I was a kid because my parents and I were learning the English language sort of concurrently at the same time,” he said. “So we’d go to the library and we’d pick up a bunch of books.”

His first debut novel, “The Magic Fish,” published by Random House Graphic, has been named one of the “Best Books of the Year” by New York Public Library.

“The Magic Fish is kind of a big love letter to all of the fairy tales my my parents and I read together. That was a memory that I very strongly sentimentalized. And it stayed with me for all of my life,” he said. “It’s a coming of age story of a 13-year-old boy. He’s Vietnamese-American and he wants to articulate the nuances of his experiences to his mother and his father. But they don’t have a language to be able to discuss it together and so they read fairy tales to each other. It’s a story about how people do their best with the tools they’re given. You can cross a lot of boundaries even though you don’t have all the right tools to say everything that you want to.”

Nguyen says many of the narrative elements of some of the parent characters reflected his parent’s experiences.

“They were Vietnamese boat people, they were refugees. They landed in the Philippines and that’s where I was born. So we had this experience of being a refugee family,” said Nguyen.

An intimate experience he says keeps his family deeply close even when they can’t always see his vision.

A Gift for Pictures

His mother, Hanh Le, is a business owner in Brooklyn Park. She says her son was always gifted as a drawer. Le says she still has pictures her son drew growing up.

“He was always very passionate about drawing. But I tried to talk him out of that as a career because I knew it would be very difficult for him to survive in that stage and then well he proved me wrong,” she said. “We didn’t allow him to play games or watch TV so he’s very artistic and very creative in his own way. Always drawing.”

Proving pictures can sometimes say a lot more than words can.

“It was the thing that I understood the best I think,” Nguyen said.

“We’re very impressed with everything that he does. But as a person, I really enjoy seeing him as a really good person growing up. It’s very helpful for the society and the family,” said Le.

Trungles is currently working on his next book project.

“It was a mode of expression that I felt came really natural to me and I really loved what the medium could do. I wasn’t someone who was a voracious comic book reader ever. This was not my expected career path, but I’m really glad I’m on it, because I get to tell stories and do things artistically that are really fulfilling that I never thought I’d be able to do.”