More than a hundred cars filled with students and families rolled through the parking lot of the School of Engineering and Arts (SEA) in Golden Valley Friday morning to celebrate a major recognition.

The U.S. Department of Education named SEA a Green Ribbon School honoree, the only school in Minnesota to earn such a distinction. 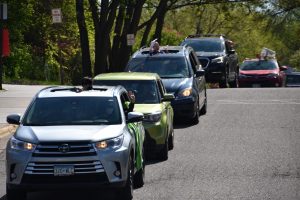 “The application focused on three different areas,” said Cara Rieckenberg, SEA’s STEAM program coordinator. “It focused on environmental education, which we do a lot here at SEA. We use the outdoors as the world’s greatest classroom, and do a lot of education outdoors. Not only with science but also with language arts and math and reading and different areas.”

The Green Ribbon application also focused on how the school could be sustainable and practice different areas of conservation. SEA displays those qualities by offering composting in the school cafeteria, being cautious about water waste, and providing recycling options for students and staff. 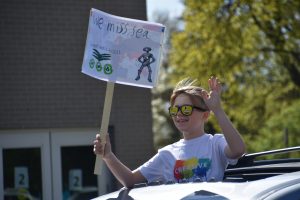 “It was quite a lengthy application, but well worth it,” Rieckenberg said.

Friday’s parade was the first time since distance learning started in March that students and staff members were able to see each other in person. That brought an extra level of excitement for everyone involved.

“We’ve seen other schools in the community have neighborhood parades, but SEA is a unique situation because we’re a magnet school and so we have students from seven different cities, and 11 percent of our population is actually out of the district,” said Rieckenberg. “It would be really challenging in a different way for us to go to every student’s house. So instead we’re having a parade ‘in.'”

In 2018, the U.S. Department of Education awarded SEA with a Blue Ribbon Award for being an “exemplary high performing school.” 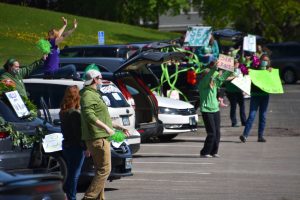 “We’ve just got to wait to see what other color ribbon the Department of Education announces we can go for next,” Rieckenberg said.