Winters in Minnesota can be unforgiving. The bitter cold forces many people to stay indoors, and if they have to go outside, it requires the proper attire. But for those without a home, the proper clothing might be hard to come by.

That’s where Michelle Christensen comes in. She’s the founder of “One Good Deed,” a group of volunteers that commits to doing at least one good deed a month.

One Good Deed is behind a recent “scarf bombing” campaign that spread cold weather gear throughout parks known for homelessness in Minneapolis and St. Paul.

Each item had a tag attached that said, “Take me! I’m not lost. I’m yours.”

“When we scarf bomb, we do everything from jackets to scarves to hats to snow pants to boots,” Christensen said. “So even though the title is scarf bombing, it’s a little bit of everything.” 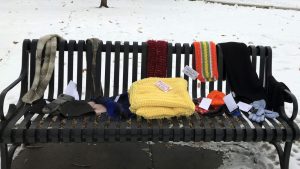 But, scarf bombing was January’s good deed.  This month, she and a group of volunteers are busy working on a new project inside Christensen’s Golden Valley home.

“Michelle is extremely organized,” said Angie Ellis, a volunteer. “She does a great job of getting people together and organizing our projects.”

The group is making plastic yarn – also known as ‘plarn’ — out of plastic bags.

Eventually, a different group of volunteers with the ability to crochet will take the plarn and turn them into plastic mats.

“So we’re gonna give the plastic mats to homeless people so it keeps them off the cold concrete,” Christensen said. “It keeps them dry.”

It takes about 500 plastic bags to make one mat. But for the One Good Deed volunteers, the manual labor involved is a small sacrifice to make to help bring joy and warmth to those who need it most.

“We’re doing it just because it’s the right thing to do and it feels really good,” Christensen said.

The volunteers from One Good Deed plan to distribute the mats in the spring at Loring Park, under the I-94 bridge near Dunwoody Institute, and near the Basilica of St. Mary in Minneapolis.