The death of Kobe Bryant has prompted a surge in interest from people wanting to get his memorabilia. 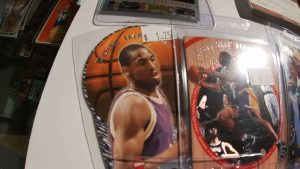 The store’s inventory includes Kobe Bryant basketball cards and Sports Illustrated covers. Owner Mark Hochstaetter expects to sell all that memorabilia by the end of the week.

“I’m currently sitting on probably about a hundred Kobe cards right now, and a few other items,” Hochstaetter said. “It won’t be here by the end of the week, cause everybody will want something to remember him by, especially if they haven’t collected any of his stuff before.”

Hochstaetter says he doesn’t plan to raise prices on any of that merchandise. However, he expects Kobe Bryant memorabilia to jump in value by about 20 or 30 percent. If potential buyers see items going for higher than that, it’s price gouging.