Golden Valley Postpones Street Projects By a Year Due to COVID-19, Cites Financial Impact on Homeowners

The Golden Valley City Council took a rare and unusual action Tuesday by postponing city construction for 2020 neighborhood street projects. The recommended delay was one year.

Council members and residents cited financial concerns due to hardships from the COVID-19 pandemic. There was also concern about residents being able to get outside while a stay-at-home order or other restrictions are in place.

“So many of us are now working from home, and the construction impact of something going on outside your house while you’re trying to conduct your work life as well as your home life is another thing for us to take into consideration,” said Gillian Rosenquist, a Golden Valley City Council member.

The 2020 project schedule would have affected residents east of Medley Park and south of Medicine Lake Road in the northwest part of the city. A total of 86 properties would have been impacted, according to city documents.

Tuesday’s meeting allowed residents to call in with concerns.

Residents who live in the affected areas would have been charged an assessment of $8,646. Assessments on property owners cover 20 percent of neighborhood street projects. A citywide tax levy pays for the rest.

Maureen Ziezulewicz, who lives on Zealand Avenue, told the council that the extra two feet would raise her assessment by about $1,100.

Other residents also voiced concerns about the overall project.

“Many families have taken a reduction in income, experienced furloughs or layoffs, and there are many unknowns in the coming months,” said Andrea Lentini, a Zealand Avenue resident who urged the council to consider alternatives.

“I’ve heard loud and clear from residents in terms of their concerns around COVID-19 and the economic impact it’s having on our community,” said Golden Valley City Council member Larry Fonnest, who pushed to delay work by a year.

“Hopefully by then not only will COVID-19 pandemic be under control, but we’ll have a much better sense as a community in terms of our shared finances,” said Fonnest.

The city’s 2020 pavement construction schedule totaled nearly $5.6 million. It would impact 1.3 miles of residential streets. The work would involve more than street reconstruction, but also calls for improvements to storm and sanitary sewers, and replacement of water mains. The city also planned to partner with CenterPoint Energy for replacement of gas mains.

Golden Valley City Manager Timothy Cruikshank acknowledged the work could be put off a year without causing further infrastructure issues.

“We’re doing these projects for a reason. It’s because we have infrastructure that’s challenged.” said Cruikshank. “While not optimal, we don’t have a pending crisis in play.

“In general, we don’t have ‘mission critical’ infrastructure that needs to be addressed immediately this year?” asked Golden Valley Mayor Shep Harris. 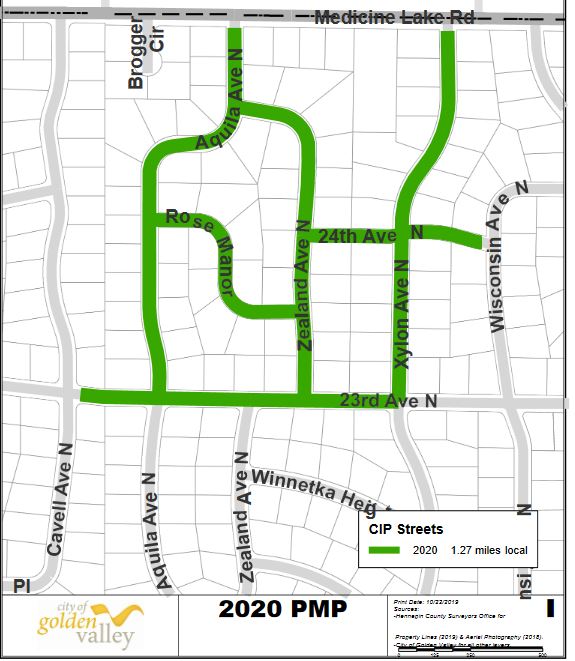