The city of Golden Valley continues to wrestle over the size of homes built on narrow, smaller lots. The city held an open forum Thursday night to discuss the issue. 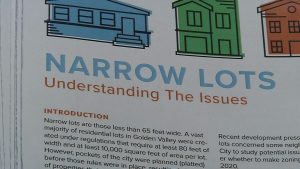 “It’s going to be tight compared to what we’ve been used to,” said Hills, who has lived in Golden Valley since 1965. “We have a house kiddy-corner from us, across from the new house that was built in 1913. So it’s just so different from anything that would be built now.”

Hills wonders how it will impact her neighborhood like new development did for others.

“If we allow some of this development to continue, then you are going to see a change in some of these neighborhoods and you may see larger homes on small lots,” said Harris.

Golden Valley defines narrow lots as 65 feet wide or less. There are approximately 1,350 narrow lots in the city, many of them zoned more than 100 years ago.

Golden Valley reduced the allowable height of homes in 2008. That was a time when “mcmansions” were a big issue in the city of Edina and Golden Valley wanted to get ahead of the issue. The current maximum height is 28 feet to the mid-point of the highest pitched roof.

Harris knows there needs to be a balancing act between the needs of families and maintaining the character of older neighborhoods.

“We’re trying to create something new that will be flexible enough that will allow housing to continue as people want to redevelop or remodel their homes or build a new home if the housing stock has gotten too old, but do it in a way that will be similar in size and scale to the surrounding neighbors,” said Harris.

John Griffiths came to the open forum hoping to learn what the issues are. He sees pluses and minuses to development on narrow lots.

“Sometimes it would be a great thing,” said Griffiths. “It would be more affordable for people because Golden Valley is expensive to live in, but it also could change the complexion of a neighborhood too.”