A much-anticipated remodel of the Golden Valley City Council chambers is now on hold. The city council on Tuesday rejected bids for the project after they came in much higher than expected.

Golden Valley plans to give the council chamber a fresh look and upgrade the audiovisual technology equipment. However even the lowest bids came in more than double what the city budgeted.

Work was supposed to start this past winter and be finished by late spring. 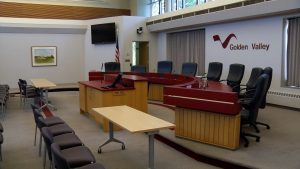 Dais will be reoriented to create more welcoming feel

It’s been 30 years since the chambers have had any significant improvements. City officials also say the audiovisual system is aging and needs replacement.

The Golden Valley council chamber will be reoriented to make it more flexible to be used for other purposes.

“The improvements will help make the council chambers more welcoming, they’ll be more updated and look more contemporary,” said Nevinski. “We’re definitely trying to pull off the mid-century modern theme that is so prevalent in Golden Valley.”

Why the Bids So High?

“We think, in part, we were opening bids in what was becoming a difficult and uncertain environment,” Nevinski told council members Tuesday. 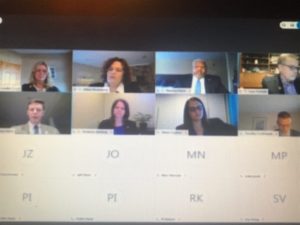 “Our construction schedule was fairly aggressive. We had some tight timeframes because we needed to accommodate a primary election in August, and we also had to juggle the needs of the AV contractor,” he said.

Early voting is scheduled to start in June.

“That puts more pressure on the contractor, and that’s been part of the reason the bids were higher than expected,” Nevinski said.

The bid rejection intends to give the city a little more clarity in the coming months amid the COVID-19 pandemic. Nevinski said that will help the city make a better decision when it plans to rebid the project.