When you think of rowhouses, you may think of the brownstones in New York, Philadelphia or Boston. But not all rowhouses are like that. The city of Golden Valley has started the conversation about adding rowhouses to its housing types.

“These are great for providing a little bit more density, but not becoming the larger apartment building that gives some people some concern in terms of being out of scale or character with the rest of the neighborhood,” said Golden Valley City Planning Manager Jason Zimmerman.

Rowhouses are generally multiple attached units, typically side by side, with individual entries and two to three stories in height. They can either be rental or separate ownership.

Golden Valley would have to amend its R-2 zoning, which is for moderate density residential, to allow rowhouses. R-2 currently allows single and two-family homes of up to eight units an acre. Lot widths allowed are 50 feet per single-family home or 100 feet for two-family structures. The height requirements are the same as R-1 zoning, or the single-family housing district.

A Survey of Other Cities

The Golden Valley Planning Department looked at other cities to see what they have already done. Those cities included Minnetonka, St. Louis Park, Richfield and Roseville. Staff found that four to eight units in one structure were quite typical, with four units the most common.

“None of the ones that we found were rowhouse specific, but they did address attached units at similar numbers and density as to what we’re thinking about,” said Zimmerman.

Zimmerman noted at the Sept. 29 planning commission meeting that St. Louis Park and Minnetonka were in a similar range to Golden Valley’s R-2 zoning.

“To Set a High Bar is Important” 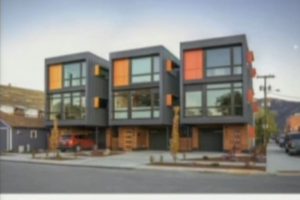 Example of modern rowhouses in Colorado

Members of the Golden Valley Planning Commission say they understand there may be pushback to a new housing type in the city.

“There’s been a lot of resistance to this housing type,” Ronald Blum, chair of the commission.

But Blum says if you set the standards high, more people may be receptive to it, offering an analogy to the electric car maker Tesla. 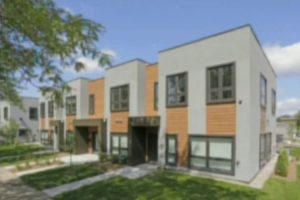 Example of rowhouses in north Minneapolis

“Having worked for an architectural design firm, it’s important to me, and I think Golden Valley exudes an aesthetic that is extremely desirable,” said Sadeghi. “To set a high bar is important.”

Golden Valley staff members plan to come back at the next planning commission meeting with more specifics. Commission member Lauren Pockl stressed the importance of not disrupting the character of existing neighborhoods.

“I do think that it is important to maintain the character of the neighborhoods that we’re trying to fit these rowhouses into,” said Pockl