The city of Golden Valley is looking for public input on the future of its downtown area and city hall campus.

The city is conducting a study on city facilities, which officials say are aging and “don’t efficiently support the city’s current or future operational needs.” The study will look at the cost of building new facilities and address the best locations to put them.

That includes the city hall building currently located at the northeast corner of Golden Valley Road and Winnetka Avenue. A recent study of the downtown area identified the city hall campus as an opportunity for private redevelopment.

“From the outside, the building is almost hidden from Winnetka Avenue and Golden Valley Road, showing its backside to the city’s prominent commercial intersection,” said Marc Nevinski, Golden Valley’s physical development director.

Visitors to city hall also share parking with neighboring police and public works facilities, creating congestion and safety hazards, said Nevinski. When visitors enter the building, the first thing they see is the waiting area for the busy Minnesota Driver and Vehicle Services area, resulting in confusion, he said.

The proposed buildings would accommodate a planned change for its 50 fire department staff members from the current paid-on call model to a 24/7 part-time duty crew.

The study will also look at consolidating Golden Valley public works facilities. The goal is to move them away from the city’s downtown to reduce congestion.

There is currently four separate facilities for public works, with salt storage a mile away from those facilities, creating inefficiencies, said Tim Kieffer, the city’s public works director.

“Making everything fit is like playing a giant game of Tetris,” said Kieffer. 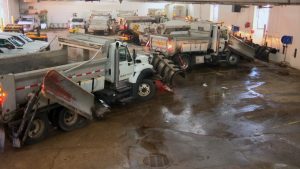 The city in partnership with CCX Media posted a YouTube video on the facilities study.

The city is accepting input through Jan. 11. Residents can learn about the facilities study and take the survey here.