People come to Theodore Wirth Park in Golden Valley for any number of reasons. Some visit for the beautiful scenery, and others for the opportunity to see wildlife in their natural habitat.

But there’s something else in the park that’s been drawing people as of late, a treasure hunt of sorts.

That is if your idea of “treasure” is a life-sized Neanderthal completely trapped in ice.

“His name is Zug Zug, and he is as anatomically correct of a caveman as we can make it,” said Zach Schumack of Leonic Art Collective.

Yes. Theodore Wirth Park is now home to a frozen caveman, who’s become quite the attraction among people of all ages.

“I think it looks cool,” said one child.

“Our younger brother was snowshoeing over here the other day and saw it, so we just had to come over and check it out,” said a visitor from Golden Valley.

Local artists originally made Zug Zug as a prop for an awards ceremony.

“We spent weeks and weeks to build this thing and we had it on display for maybe four or five hours,” Schumack said. “And since then, it’s been sitting in storage and then in my garage for months on end. And every day when I go out into my garage and see that thing sitting in there, it was kind of depressing.”

“Depressing” is something that could also be said of current events, so Schumack and his buddies thought it was time to take their Neanderthal friend out of storage.

“We finally decided to pull the trigger and say, ‘you know what, let’s put this piece somewhere out in nature where people have to actively go find it, but then create something else for people to talk about and to go look [at] besides what we’re all kind of use to right now,'” Schumack added.

As lifelike as possible

The goal was to make Zug Zug look like the real deal.

“It took several days of actual painstaking research,” said Ian Molloy-Busse, one of the artists responsible for making Zug Zug. 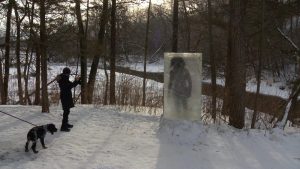 A passerby takes a picture of the frozen caveman, Zug Zug, at Theodore Wirth Park.

To make that happen, the artists looked into the physical characteristics of a Neanderthal, and they somehow transformed a mannequin into an axe-holding caveman covered in ten layers of epoxy resin.

“Exactly, I wanted it to look really real,” Molloy-Busse said. “I really wanted to really impress folks, and I tried my hardest to make it look as realistic as possible.”

The results have been nothing short of amazing, according to those who find it.

“It looks like a real person inside the ice,” one kid said.

“It’s so lifelike,” a lady said. “It’s great. Good time to get out and enjoy our parks too.”

Anyone wanting to see Zug Zug with their own eyes will have to find it themselves. The artists wanted people to get out of their homes and enjoy their natural surroundings.

“My husband and I have been getting lost in the woods for over 40 years, so this was just perfect,” said Ellen Lasner of Golden Valley. “Today we got to do it with a four-and-a-half month old puppy and see a neanderthal man encased in ice. What more could you ask for on a beautiful sunny day in Minnesota in the winter?”