A Robbinsdale resident captured video of school buses having a tough time getting up a hill near her home.

“It was not a good morning for bus drivers today,” said Robbinsdale resident Erica Garcia-Jones. 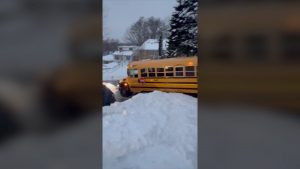 A Robbinsdale school bus hit a snowbank after rolling down an icy, hilly road

The bus was driving down a hill near Halifax and 33rd Avenue North when he slid right into Garcia-Jones’ front yard, hitting a snowbank.

“We were trying to shovel him out. We were putting mats under the tires, trying to get them out. I just felt really bad for the driver,” said Garcia-Jones.

The school district explained in this statement sent to CCX News:

“Robbinsdale Area Schools typically cannot offer two-hour late starts as a way to address extreme weather conditions because we have three tiers of busing which means students on the last tier wouldn’t arrive at school until noon or later.”