Former pro basketball player Devean George is working on a project that would bring a significant new housing and commercial development to the city of Brooklyn Park.

George is behind the Village Creek Apartments, a project that’s been in the works for several years. On Monday, the Brooklyn Park Economic Development Authority (EDA) approved a financing arrangement to assist in the development of the 5-story building, which would contain 83 housing units with 19 of those set aside for lower incomes. It would take over vacant land at 7621 Brooklyn Boulevard currently owned by the EDA.

City leaders expressed appreciation for how George worked with the city to help meet the area’s housing needs.

In addition to the housing, the development would include 10,000 square feet of commercial space on the ground floor. Half of that space would contain a restaurant and commercial kitchen that small business owners could lease to make their goods.

The project would also fulfill a dream for Lachelle Cunningham, a local chef. She who would use 2,000 square feet of space for her Healthy Roots Institute to teach classes to budding food entrepreneurs.

Another 1,000 square feet would be used for a pop-up retail shop.

“The pop-up is really for the people that are using the commercial kitchen and the people in the community … to test out their goods or services out to the market,” explained Devean George.

Remaining space would be used for George’s nonprofit, Building Blocks, which provides mentoring and after-school programs. 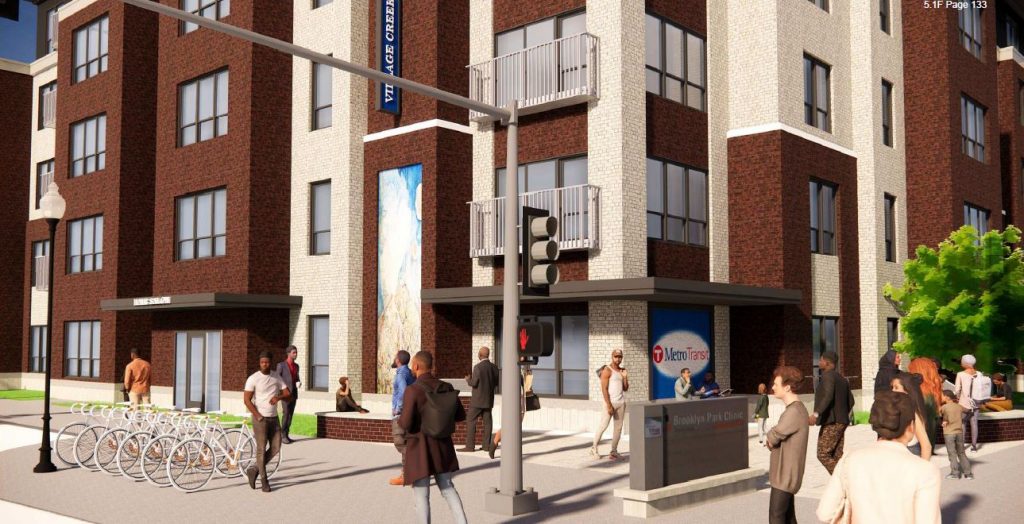 George runs Wayzata-based George Group North. To help finance the project, the EDA approved the establishment of a new tax increment financing (TIF) district. TIF is a tool used to direct property taxes from development sites to help finance projects. In this case, the city’s EDA approved providing $2.3 million in “pay-as-you-go” TIF, which will reimburse the developer periodically rather than providing an upfront payment.

According to city officials, the project has the possibility of generating $6.9 million in additional tax value, also known as increment.

The newly created TIF district would be terminated in 2049, allowing the city to recapture all the tax dollars generated by the project.

The TIF agreement with George Group North requires construction to start by Dec. 1. George estimates the project will take 12 to 14 months to complete. Construction is expected to start this summer after the land sale is finalized.

“We’re ready to get to work,” said George.