The man accused of killing Jay Boughton, a Crystal father, husband and coach, was scheduled to appear in a Minnesota court Wednesday afternoon. That hearing was delayed by a day due to Smith being “too violent” with sheriff’s deputies and unable to meet with his court-appointed attorney. CCX News reached out to the Hennepin County Sheriff’s Office seeking specifics.

The suspect, Jamal Smith, 33 of Chicago, was booked Tuesday shortly after 8 p.m. in the Hennepin County jail. He’s charged with second-degree murder.

Boughton was shot and killed July 6 while driving on southbound Highway 169 near Rockford Road.  The investigation went on for more than a month. But then on Aug. 24, in what Plymouth Public Safety Director and Police Chief Erik Fadden described as finding “a needle in a haystack,” an arrest was made.

Smith was arrested in Decatur, Ill., about a three-hour drive south of Chicago. According to jail records, preliminary bail was set at $2 million. 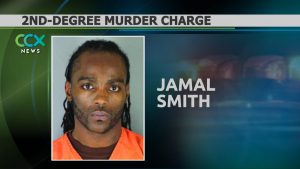 The criminal complaint says the shooting stemmed from a brief traffic altercation. MnDOT surveillance video showed an SUV, believed to be a Chevy Suburban, “driving erratically and at a high rate of speed” before encountering Boughton’s vehicle. The complaint said the suspect’s vehicle was next to the victim’s vehicle for about 10 seconds when a shot was fired, striking Boughton in the head and killing him. The victim’s 15-year-old son was in the front seat and attempted to perform CPR on his father after their vehicle crashed.

Police eventually located a 2019 Chevy Suburban on July 23 at a towing impound lot. The SUV had been reported stolen by a rental car company. The complaint says the vehicle was seen prior to being found at a residence on Shelard Parkway, not far from where police believe the suspect exited from Highway 169.

The complaint says authorities met with a witness, identified as the suspect’s girlfriend. The witness stated she had confronted Smith about the crime and he said “the police don’t have any evidence.” The complaint said the witness reported that Smith tried to talk her into going to Chicago after the news story was broadcast to avoid “people that will be coming to talk to you,” referring to police.

A Facebook Live video, made hours before the shooting, also helped police identify Smith, the complaint states. A weapon held by the suspect was seen in the video that police matched to the shooting scene. Police also executed a search warrant to recover clothing items and belongings traced to Smith at the Shelard Parkway address.

Police continue to investigate two other people in connection to the shooting, but no additional arrests have been announced at this time.