This week, students in Jackson Middle School‘s eighth-grade astronomy class learned more about the recently-released photograph of a black hole.

Scientists assembled the image from data gathered by eight radio telescopes around the world. The object is in a galaxy 53 million light years from earth. The image confirms a long-held theory of what a black hole looks like.

“When we see confirmation of our scientific theories, when it’s no longer just a model, it’s the real thing, that over and over again confirms that our scientists are doing good work,” said Ron Schmit, Jackson Middle School’s observatory coordinator. “They’re describing the world around us mathematically. And they’re coming up with solutions to those questions of what is this? How does it work. And can we benefit from it?” 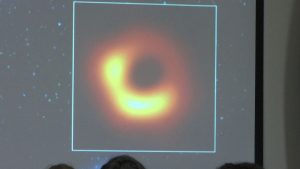 Scientists captured the image of the black hole two years ago over a course of four days.