Multiple fire departments worked to put out a fire on Sunday afternoon at a Brooklyn Park apartment building.

Around 4:12 p.m. crews were called to Waterford In The Park, on the 7000 block of 62nd Avenue. Brooklyn Park police say smoke was seen rising from the building from about a mile away.

Firefighters were able to put out the flames quickly on the building’s second and third floor balconies. Crews stayed on the scene for about 2 more hours conducting salvage and overhaul. 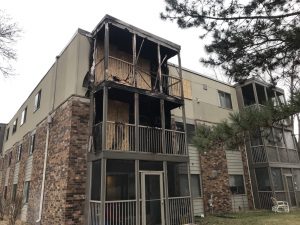 Crews contain fire on the 2nd and 3rd balconies of a Waterford In The Park apartment building.

A first responder suffered a minor injury, but no one else was hurt. The cause of the fire is still under investigation.