After years of trying to lure arguably the most iconic automobile brand in the world, the Carousel Motor Group (CMG) officially opened a Ferrari dealership on Sept. 9. The dealership, called Twin Cities Performance, is located southeast of Highway 169 and Interstate 394 in Golden Valley.

Carousel Motor Group, the automotive division of the Pohlad Cos., successfully attracted the Italian carmaker due to the area’s economic profile. Chase Hawkins, general manager and CEO of CMG, cited the region having all the major pro sports teams and the dozen-plus Fortune 500 companies headquartered in the Twin Cities.

“We always knew there was an opportunity here,” said Hawkins.

The Golden Valley location is just one of 45 Ferrari dealerships in the United States. The closest location previously was in Chicago. Hawkins says the customer response has exceeded the company’s expectations so far.

What surprised the company the most has been the number of Ferrari owners using the service department.

“Since we opened the door, there has been a constant flow of Ferraris through our service department,” Hawkins said.

Behind the Ferrari Brand

The 15,500-square-foot dealership features a lounge area displaying Ferrari history. It includes video feeds sent directly out of the carmaker’s headquarters in Maranello, Italy. There’s even a one-of-a-kind photo of Enzo Ferrari taken by a Minnesota client. Ferrari loved the photo so much, Hawkins said, that he had it in his office before his passing in 1988.

Three Ferrari models dazzle the showroom. They include the Portofino M, which company company officials describe as an entry into the Ferrari brand.

“What’s nice about a car like this is, it’s an everyday driver’s car,” said Hawkins. “So real easy to get in and out of, it’s got all of the luxury and the comfort that you’d expect in a convertible.”

There’s also the Ferrari Roma, launched last year, and the F8 Spider, the most popular in terms of demand.

While new vehicles have a wide range of prices depending on model and design preferences, they generally range from $250,00 to $625,000. Hawkins says Ferrari maintains its aura and mystique by consistently switching up product lines after a couple years and limiting production in total.

At Twin Cities Performance there’s also a room where customers envision their new vehicle. Hawkins describes it as “where all the magic happens.”

Once customers choose a model, dealership employees help customers choose materials – everything from the steering wheels to the interior stitching. Meanwhile, a high-resolution screen shows customer selections as they design and build.

“Whatever you imagine with tailor-making your Ferrari, we can make that happen,” said Hawkins.

Upon placing an order, it usually takes about one to three years, depending on the model, which is not unusual for the high-end vehicle market. The final design gets approved at company headquarters in Italy, bringing a rare, new art form to the road.

“With your car, you’re contributing to the history of Ferrari,” said Hawkins. 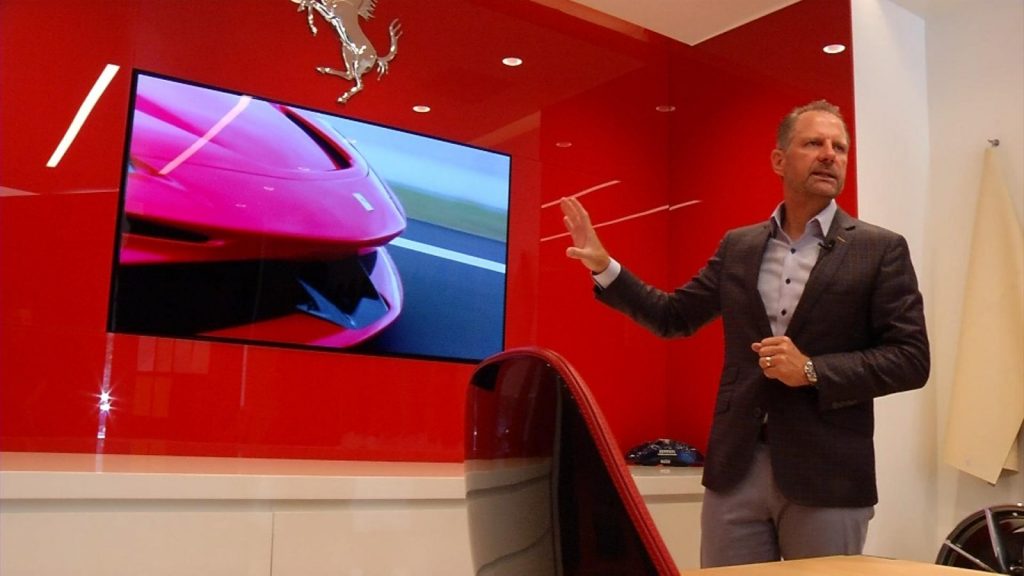