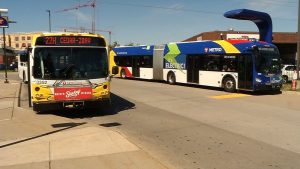 Part of that planning includes community engagement to select and prioritize the next arterial BRT lines.  The Network Next website asks for feedback by Friday, Oct. 9.

But city council members expressed doubt regarding a lack of information about the project, the timeline for feedback, and the future route.

“Why don’t they at least take it over to the college?” said council member Tonja West-Hafner. “I think they need to figure out if it’s in addition to or replacing a line.”

“It should continue to Arbor Lakes. We should give our residents the ability to get over to Maple Grove’s premier shopping area,” said Mata.

Other council members expressed concern that the public engagement period was not well publicized and the public’s attention is not on a future bus line anyway.

Lunde and council member Lisa Jacobson also mentioned the possibility for the city to explore its own bus service.

“They are expensive and almost impossible to fund,” said Jacobson. “But rather than investing in a tremendous and expensive program, looking at it with a little more innovation.”

Jacobson suggested a possible pilot program that would look into utilizing Lift or Uber drivers.