Anoka-Hennepin and Osseo Area Schools canceled classes due to the negative temperatures. The cold also impacted commuters. AAA says the automobile group received a surge in calls due to dead batteries.

The Anoka-Hennepin and Osseo Area Schools closed school, but because conditions were expected to improve as Thursday wore on, after-schol and evening activities went on as scheduled. Osseo students in grades 6-12 also had a flex learning day, which requires students to do lesson plans online from home. 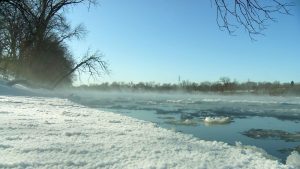 Wind chills of around negative thirty degrees on Thursday morning prompted a scene that’s more common in the Arctic than it is in Brooklyn Center. Some call the phenomenon “sea smoke.” Since the Mississippi River is mostly free of ice this time of year, a fog forms when very cold air moves across the warmer water. The result is literally breath-taking.

Cold weather can wreak havoc on your car’s battery. It’s something a number of people in the Twin Cities found out the hard way Thursday morning.

“It is very cold outside, and the majority of the calls that we’re getting have to do with batteries,” said Meredith Terpstra, a spokesperson for AAA Minneapolis. “We’re getting a lot of people calling in about jump starts, or needing tows because they can’t get their car to start. Then usually, we have a battery replacement service. When it’s this cold we can’t do battery replacements just because the batteries are too brittle. And it’s too cold outside to put our tow truck drivers at risk of getting frostbite.

On a normal day, AAA Minneapolis (which has an office in Maple Grove), gets about 300 calls for Roadside Assistance service. But by noon Thursday, their tow truck drivers had already responded to 200 service calls. Most of those calls were to jump start dead batteries. 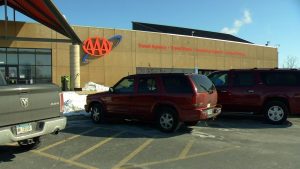 A basic AAA membership starts at around $65 a year.

Meanwhile, AAA officials say warming up your car is certainly one way to avoid a dead battery, but contrary to popular belief, simply starting your car and letting it idle for a few minutes won’t do the job.

“In order to recharge your battery, you actually have to drive your car around for a few minutes,” Terpstra said. “You can’t just turn it on and leave it sit. That’s not gonna help you with charging your battery. So when you start getting close to the zeros and the negatives like we are today and tomorrow, it’s good to go out every 4-6 hours. If it’s reasonable, start your car and then drive it around for five minutes.”

Another piece of advice from AAA is to keep your gas tank filled at least half way during cold weather. Then, you can stay warm in case you’re stranded.