A familiar food trailer in Brooklyn Park took up a temporary new residence Friday. You might remember Philip “The Donut Guy” Lawrence. We featured him during the holiday season after local police boosted his business by announcing their investigation of someone “doing donuts” in the Brooklyn Park Fleet Farm Parking lot.

That post went viral, and Philip’s business exploded to the point that a second trailer was brought in to help meet demand. Friday, Philip gave back by locating his mini-donut trailer where some might say it was always meant to be; the parking lot of the Brooklyn Park Police substation. 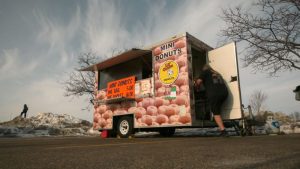 He donated a dollar from every sale to the explorer’s program as a way of saying thanks for the extra business.

“I’m here to give back to them for giving me a really good, fun, laughter opportunity in my life,” said Philip. “I’ve been doing donuts for 15 years and it was hysterical.”

The money will help send Police Explorers to other states for competitions. “These fundraisers are huge, especially for the explorers,” said Detective Matias Gomez. “They’re going to high school. Some of them have limited income. Going out of state can be very expensive, so we try to do as many fundraisers as we can.”

If you missed your donut fix Friday, Philip’s back in the Fleet Farm parking lot until just after Valentine’s day. And if you’d like to help the explorers out, stop by a Brooklyn Park police station with your donation.