Don’t Veer For Deer, Efforts to Cut Back on Car-Deer Collisions

It’s peak season for when deer are on the move and drivers in the northwest metro should be extra cautious.

Lt. Gordon Shanks with the Minnesota State Patrol said in the last five years, there’s been more than 7,000 deer-car crashes. That number includes 20 deaths. Seventeen of those deaths were on motorcycles.

“I would say November is a busy month in terms of deer crashes and people involved in deer crashes,” said Lt. Shanks.

Deer collisions use to happen mostly in Greater Minnesota but recently it’s been more of a statewide issue. According to a State Farm study, Minnesota is one of the top 10 states where animal collisions are most likely to happen.

“In the past decade, deer crashes have decreased,” said Shanks. “But that’s only due to the fact that only some are reported, they may just call insurance.”

The number of deer-car crashes is significantly lower than it use to be. Lt. Shanks said in the 1990s the state averaged around 6,000 deer crashes a year. Last year, there were only about 1,200.

John Moriarty with Three Rivers Park District said part of the reason for the significant reduction of deer-related car accidents could be due to controlled deer hunts.

“A controlled deer hunt is basically a deer hunt where we restrict where hunters can be,” said Moriarty. “We encourage hunters to take does because what we’re trying to do is manage deer population, because we have too many deer in the metro. By taking does, you reduce the number of deer in the population.” 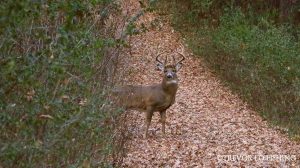 Three Rivers Park District holds controlled deer hunts in 12 of its parks including this weekend at Elm Creek in Maple Grove.

To avoid deer-car crashes, Shanks said buckle up and don’t veer for deer.

“If you swerve out of the way, you could end up into the ditch or hitting another vehicle. The impact of that crash is gonna be far more severe than hitting a deer,” explained Shanks.

If you do end up hitting a deer, Shanks advises you to call 911.