For the first time in a decade, the DFL has control of the Minnesota House, Senate and governor’s office. With that trifecta in place, DFL party leaders say they have a list of priorities they plan to pass during this year’s legislative session.

During a news conference at the State Capitol Wednesday morning, DFL party leaders in the House and Senate laid out several of their key initiatives.

Those priorities include passing a law for people to make reproductive health care decisions without interference from politicians.

Lawmakers also want to pass a voting rights bill that would institute automatic voter registration and restore voting rights to people on probation and parole.

And, DFLers want to implement a law that provides paid medical leave for people if someone in their family is sick.

“Too often we’re seeing people take time out of the workforce, or leave the workforce altogether,” said House Speaker Melissa Hortman, (DFL) Brooklyn Park. “And you know we have a workforce shortage — a slight decrease in the labor workforce participation rate over the pandemic. One of the ways we can get more workers back into the workforce is to make sure that everyone has paid family and medical leave.” 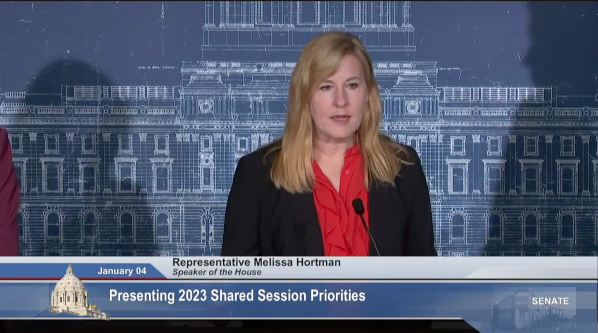 “The DFL priorities we heard today were what we expected: controversial and divisive. Rather than getting to work on balancing the budget and giving the massive surplus back to the people, they are rushing through their own top priorities without bipartisan support.

“Republicans will continue to bring the voice of the people to the table by fighting for tax cuts for the middle class, support funding for public safety, keeping energy affordable, and a focus on student achievement.”