Despite Rising Rates, Maple Grove Realtor Says ‘Life Is Much Better’ for Buyers

Throughout the Twin Cities, people looking to buy a home will find that inventory is low. But there is some good news if you’re a buyer, according to realtor Jim Holmen of Keller Williams Classic Realty Northwest in Maple Grove.

“For a buyer, life is much better than it was even just last year, because no longer are you going to have to go out and do those bidding wars, go over asking price, wave inspections,” Holmen said. “You can actually, believe it or not, look at a few houses and have a minute to think about what you maybe want to buy in a home instead of just rushing out and writing an offer in the first 15 minutes of seeing a house.”

However, mortgage rates are now hovering near 7 percent after the Federal Reserve raised interest rates to help tame inflation.

“The rising interest rates, of course, raises people’s monthly payments and they’re going to be able to feel that,” Holmen said.

It’s one reason why demand for new homes in the Twin Cities has weakened, compared to the height of the pandemic when interest rates were historically low.

“Where sellers were expecting, oh gee, dozens of showings and maybe 10 offers all coming in within the first three minutes the house was on the market, right? Now they can expect the house to sit for a little bit longer because of the rising interest rates, that buying power is a little bit less,” Holmen said.

The slump in sales can be seen around the northwest suburbs, according to September data from Minneapolis Area Realtors. 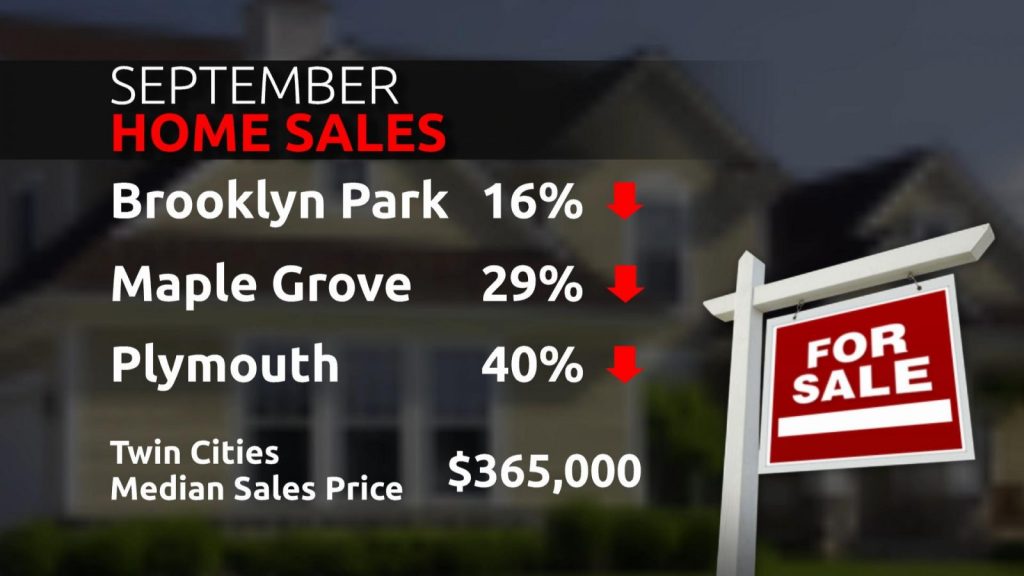 Meanwhile, sales prices continued to climb. The median sales price in the Twin Cities now stands at $365,000, which is up 6 percent over last year.

“The good houses are still selling very quickly and many times over asking price,” Holmen said. “It’s just not the same as it was over those past crazy two years.”

Meanwhile, Holmen says they’re starting to see a leveling-off of home prices. Homes are still going to increase in value, but not as quickly as we’ve seen in the past.