The Maple Grove City Council has approved an apartment project for a highly visible area of the city that’s expected to help meet a demand caused by growth in the senior population. Bloomington-based Doran Cos. is planning a 196-unit senior housing building at the southeast corner of Hemlock Lane and Arbor Lakes Parkway. 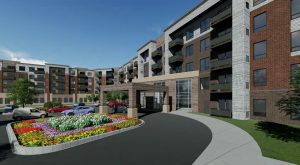 “We’re excited to start this project in the spring,” said Tony Kuechle, president of development for Doran Cos. “Hopefully COVID is gone by then.”

Kuechle says COVID-19 has resulted in the implementation of new design procedures. One example is building entrance points for workers separate from guests and visitors in an attempt to eliminate some cross contamination. During a recent planning commission meeting he was asked about ventilation systems. He added there will be individual airflow for each of the units. 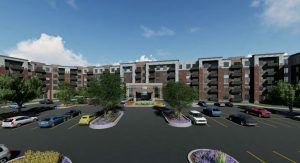 Maple Grove City Planner Peter Vickerman says the project has an overall density higher than what the current comprehensive plan calls for. As a result, the city will eventually have to approve an amendment to its comprehensive plan as required by Metropolitan Council development guidelines.

Vickerman says for the developer to get the extra density from the city, it made upgrades to its landscaping and architecture.

“Architecture is always subjective, but staff does feel this is a very nice looking building,” said Vickerman, who noted the project will also tie in nicely to the market-rate apartments built to the north of the site. “It feels like a unified development in that manner.”