A Crystal police officer is in the hospital after crashing his squad into another vehicle during a high-speed chase. The incident happened Thursday night.

According to the Crystal Police Department, a person called 911 Thursday at 10:49 p.m. saying someone displayed a shotgun and threatened him with it near the 6000 block of 56th Avenue North.

A Crystal police officer saw a vehicle matching a description the caller gave. However, before the officer could pull the car over, a chase started. The pursuit went through Brooklyn Park and Brooklyn Center. Police say the suspect tossed a shotgun from the vehicle during the chase. 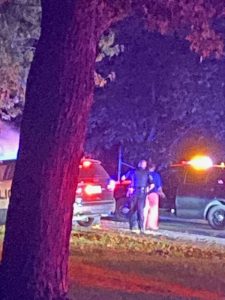 A Crystal Police officer crashes into another vehicle during high-speed chase.

During the chase, the Crystal squad hit another car at 57th and Camden Avenues in Brooklyn Center. Broken glass and car parts scattered in the middle of the street. The impact was so strong that both cars landed several yards away on someone’s property.

“I’ve never upfront seen something like this,” said Kevin Heryla, who lives a few houses from where the crash happened. Heryla says the front end of the cop car looked like an accordion. 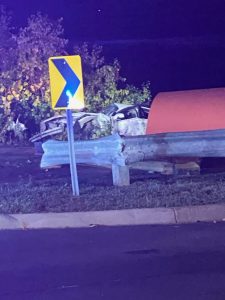 “The cop car was literally all the way into the driver’s and passenger’s seat. You could barely see the engine of the cop car,” he said.

One of the neighbors is a nurse and helped the driver who collided with the Crystal squad.

Meanwhile, the car police were chasing continued fleeing, traveling at high speed, eventually crashing near the 5700 block of Lyndale Avenue in Minneapolis. All three occupants of the vehicle got out of the car and ran from the scene. Officers subsequently located all three occupants of the vehicle with the help of a Brooklyn Park K9 and a Minnesota State Patrol helicopter. All three suspects were treated at an area hospital and taken into custody.