“I can and absolutely do recognize the contributions of the LGBTQ community in Crystal,” said Parsons. “I can’t however encourage the participation in Pride events, personally, because I believe the LGBTQ lifestyle is against my beliefs in God’s design for human sexuality. I adhere to traditional biblical beliefs.”

The city council approved the Pride Month resolution by a 5-2 vote Tuesday night. However, the city council rejected a clause in the resolution, which sparked a lengthy discussion. The clause read as follows:

“The community is encouraged to participate in Pride events in the community and neighboring communities.”

In a 4-3 vote, the Crystal City Council decided to strike the clause from the resolution.

“When it comes to encouraging and participating in the events, that’s something I can’t do,” said Adams.

Crystal City Council member Brendan Banks, who initially proposed the resolution but not that particular clause, also wanted the paragraph taken out. You can read the full resolution on page 342 of the city council packet.

“Yes, I think we should be recognizing everybody to feel welcome, that’s one of our goals and priorities,” said Banks. “But it’s not our job as a government body to be encouraging people what to do or what not to do.”

“We’ve spent a lot of time this year looking at equity and inclusion in our city, and really with Pride month and Juneteenth, really felt like we were starting to get some traction toward that goal,” said Budziszewski. “And now, all of a sudden, it’s like ‘oop, let’s pump the brakes.’ I guess I’m disappointed.” 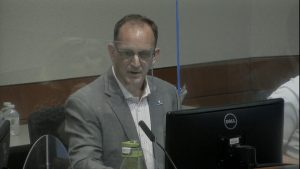 Crystal Mayor Jim Adams at Tuesday’s meeting. “I do want to lead in a biblical fashion,” he said.